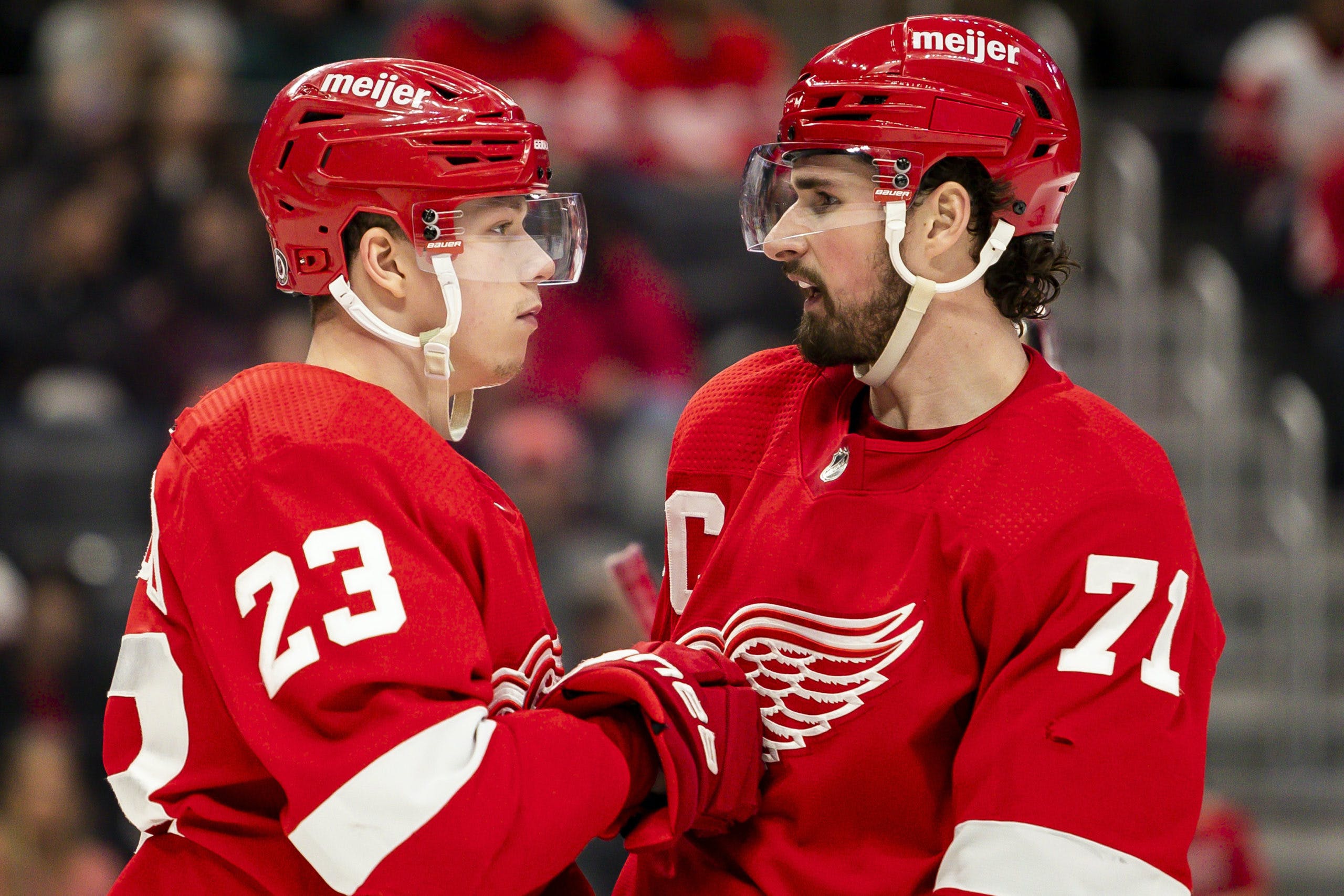 By Mike Gould
9 months ago
Playing against a Carolina Hurricanes team with plenty of star-power, the Detroit Red Wings needed some of their own to stand a chance of winning Tuesday’s game at Little Caesars Arena.
That’s exactly what they got.
Faced with a 3–2 deficit with just 3:48 remaining in regulation time, the Red Wings received goals from first-line forwards @Dylan Larkin and @Lucas Raymond to propel them to an overtime victory.
Larkin’s goal came just 38 seconds after @Jordan Staal scored to put the Hurricanes up by one late in the third period.
The Red Wings captain intercepted a failed pass by @Brady Skjei right in the slot and immediately took the puck toward the Carolina net. Larkin carried the puck on his backhand and flipped it past Hurricanes goaltender @Antti Raanta to make it a 3–3 game.
The Red Wings upped the drama tenfold for their overtime goal.
The officiating crew called the Hurricanes for a “too many men” penalty with just 1:47 remaining in the extra frame, sending the Red Wings to a rare four-on-three power-play opportunity.
The clock ticked down to the final minute of play in overtime. With 20 seconds left, the Red Wings had taken two shots (and had another two blocked) during the man advantage.
Then, with 10 seconds remaining in overtime, a scramble ensued near the Hurricanes’ crease. @Tyler Bertuzzi swatted at the puck, causing it to bounce over to a wide-open Raymond at the left side of the net.
Raymond had the entire net in front of him. He made no mistake.
@Carter Rowney and @Michael Rasmussen also scored for the Red Wings in Tuesday’s contest. Staal, @Jesper Fast, and @Sebastian Aho tallied for the ‘Canes.
Detroit managed to out-shoot the Hurricanes by a 41–30 margin, with Red Wings goaltender @Alex Nedeljkovic making 27 saves for his 15th win of the season.
Red Wings defenseman @Moritz Seider logged 25:09 (!!) in the game and recorded the secondary assist on Raymond’s overtime winner, extending his point streak to seven games (the longest achieved by a rookie defenseman in franchise history)
With the win, the Red Wings improved to 24–24–6 on the season; Carolina fell to 37–11–5 but remained atop the Atlantic Division. The two teams will finish their three-game season series against each other in Raleigh on Apr. 14.
Detroit will go the next two days without a game before kicking off a Floridian road trip with a game against the Tampa Bay Lightning on Mar. 4.