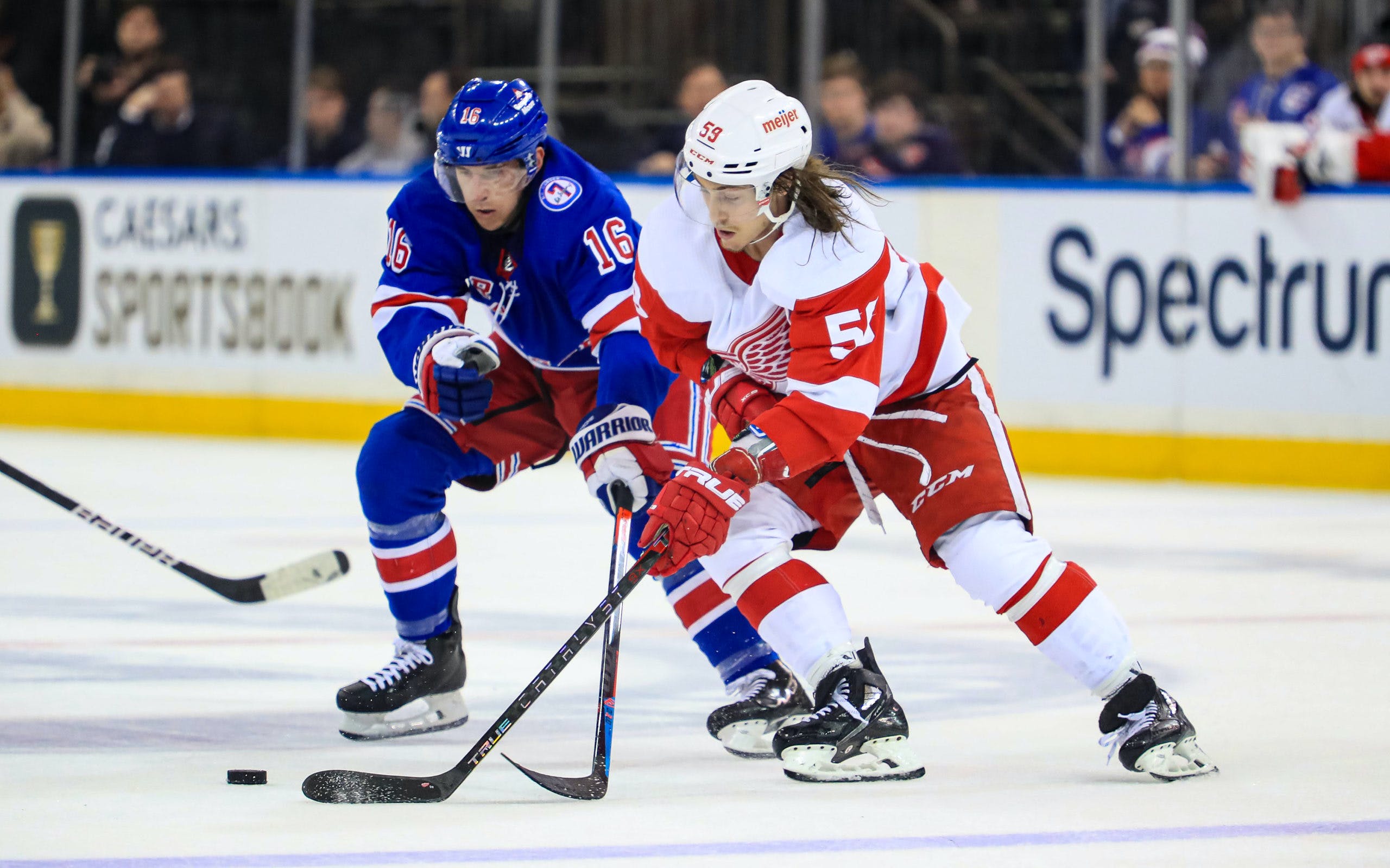 By Mike Gould
8 months ago
The Detroit Red Wings are in a bit of a funk.
Having won just three of their last 15 games, the Red Wings will return to action on Wednesday afternoon when they host the New York Rangers at Little Caesars Arena (7:30 p.m. ET, TNT).
It would be hard for the Wings to sink lower than they did on Sunday, when they became the first team in the National Hockey League’s salary cap era to allow more than 10 goals in a single game. Detroit’s 11–2 loss to the Pittsburgh Penguins marked the third time in the last month that the Red Wings have allowed nine or more goals in a loss.
The Red Wings also lost goaltender @Calvin Pickard to injury in Sunday’s game. @Victor Brattstrom has been recalled from the American Hockey League in Pickard’s absence and will likely serve as @Alex Nedeljkovic’s backup against the Rangers.
@Lucas Raymond picked up an assist in the lopsided loss to Pittsburgh, bringing him within one point of becoming the 13th player to score 50 as a rookie with the Red Wings. The last Detroit player to achieve that feat? Nicklas Lidstrom.
The Red Wings (26–32–8) and Rangers (39–17–10) have met once previously this season, with Detroit eking out a 3–2 shootout victory at Madison Square Garden back on Feb. 17. @Troy Stecher and @Dylan Larkin scored in regulation for the Red Wings in that game before @Pius Suter won it in the skills competition.

Detroit: To absolutely nobody’s surprise, @Jakub Vrana continues to be one of the only reasons to watch the Red Wings at this point. Since returning from injury, the 26-year-old has picked up right where he left last season with six goals and eight points in 10 games (including one of the Red Wings’ two goals in their 11–2 loss to Pittsburgh).
New York: How about @Frank Vatrano? The 28-year-old winger has gotten off to a really nice start in the Big Apple since being acquired from the Florida Panthers in a cap-clearing move before the deadline, scoring five goals in his first seven games with the Rangers. Four of those goals have come in Vatrano’s last three games.

Wednesday’s game at Little Caesars Arena will be broadcast on TNT starting at 7:30 p.m. ET. It’ll be sent over the airwaves on WXYT-FM 97.1 “The Ticket” in the Detroit area, as well as on the Red Wings’ official website.