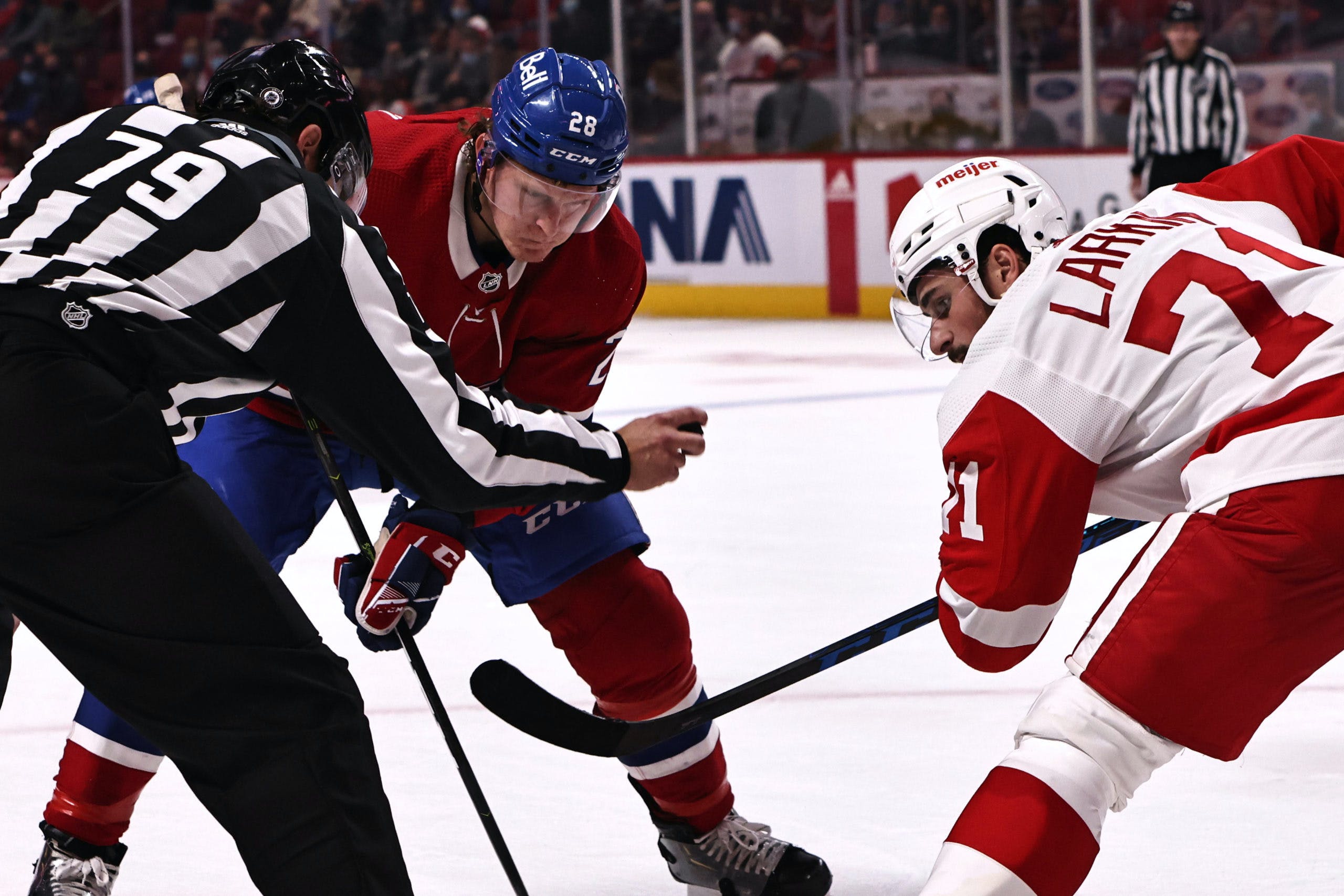 By Mike Gould
1 year ago
The Montreal Canadiens have just two wins in 10 games this season.
One of those victories came against the Detroit Red Wings on Oct. 23, when @Mathieu Perreault scored a hat trick in a 6-1 Habs win at the Bell Centre.
Tuesday’s rematch between Detroit and Montreal will also take place in the venerable Québécois coliseum, the NHL’s largest arena by seating capacity. Despite having room for 21,302 fans in the Bell Centre, the Canadiens have averaged 2,282 empty seats through their first four home games of the 2021–22 season — three of which have been losses.
That’s right: Detroit handed Montreal its first (and, to this point, only) home win of the season just over a week ago. To their credit, the Red Wings rebounded to go 2-1-1 in their next four games.
Rookie defenseman @Moritz Seider picked up an assist on the Red Wings’ lone goal in their blowout loss in Montreal on Oct. 23. That contest served as the start of a five-game point streak for 20-year-old, who leads the team with eight assists this season but is still searching for his first NHL goal. He’ll look to continue his strong play on Tuesday.
Most recently, Detroit fell to the Toronto Maple Leafs by a 5-4 score on Nov. 30. With @Tyler Bertuzzi out of the lineup at Toronto’s Scotiabank Arena due to his unvaccinated status, @Joe Veleno stepped in for the Red Wings and posted two points in the defeat. He’ll retain his spot in the lineup for the Canadiens game — and perhaps beyond.
Immediately after defeating the Wings, Montreal embarked on a four-game Pacific Division road trip and posted a 1-3-0 record. They allowed five goals in both Seattle and Los Angeles and conceded four to the Anaheim Ducks, shutting out the San Jose Sharks in the middle by a 4-0 score.

Detroit: It’s hard to say whether the Red Wings intended to bring up @Joe Veleno purely as a short-term Bertuzzi replacement or for the purposes of an extended experiment. Either way, it looks like Veleno might be forcing the Wings to keep him in the NHL. He got off to a good start in Toronto, posting two points in spite of his team getting soundly outplayed in most facets of the game.
Montreal: Basically everybody is struggling in Montreal. Remember last season, when @Tyler Toffoli scored 28 goals in just 52 games? That was clearly never going to be sustainable … but Toffoli has now gone in the complete opposite direction, having managed just one goal and three points in his first 10 games of the 2021–22 season. Something has to give.

Friday’s Red Wings game will be broadcast on Bally Sports Detroit Plus starting at 7:00 p.m. ET. Canadian viewers will be able to watch on TSN2 and RDS.
It’ll be sent over the airwaves on WXVT-FM 97.1 “The Ticket” in the Detroit area, as well as on the Red Wings’ official website.
Uncategorized
Recent articles from Mike Gould