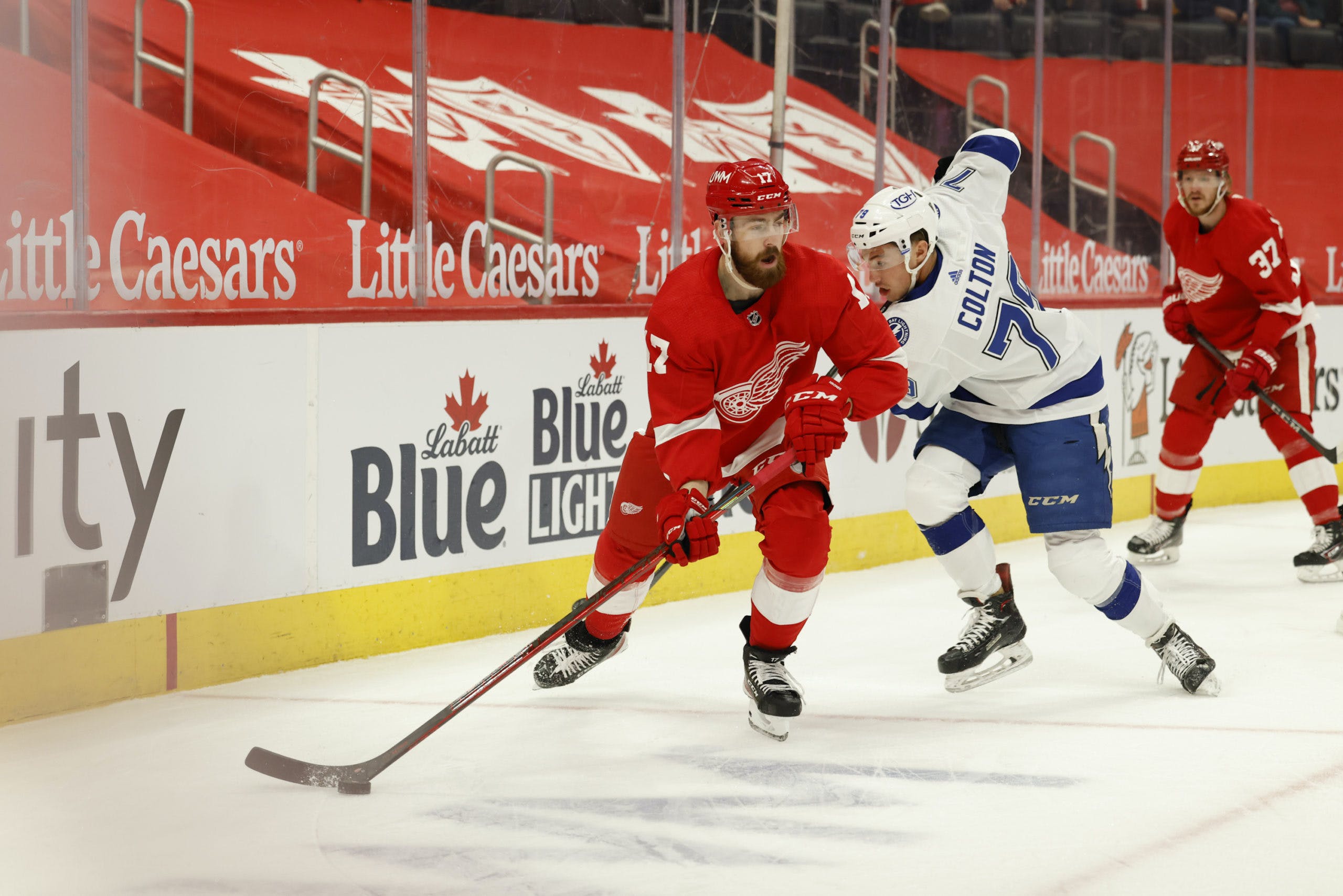 By Mike Gould
1 year ago
It’s time to drop the puck!
The Detroit Red Wings will open their 2021–22 slate of games Thursday when they host the back-to-back defending Stanley Cup champion Tampa Bay Lightning at Little Caesars Arena.
Opening puck-drop is scheduled for 7:30 p.m. ET. Here’s everything you need to know in advance of today’s game.

It’s officially Lucas Raymond and Moritz Seider season! The two prized Red Wings prospects will make their NHL debuts Thursday against some of the toughest competition the league has to offer.
Raymond, 19, will likely start on the right side of Detroit’s first line after looking fantastic in pre-season competition. The Red Wings selected him with the fourth-overall selection in the 2020 NHL Entry Draft.
Seider, 20, has the potential to be one of the faces of the new wave of German NHL players. The young right-handed rearguard was named the top defenseman in the entire Swedish Hockey League in 2020–21.
Here’s how the Red Wings practiced yesterday, according to Ansar Khan of MLive.com:
Tyler Bertuzzi – Dylan Larkin – Lucas Raymond
Robby Fabbri – Pius Suter – Filip Zadina
Vladislav Namestnikov – Michael Rasmussen – Adam Erne
Givani Smith/Carter Rowney – Mitchell Stephens – Sam Gagner
Danny DeKeyser – Filip Hronek
Nick Leddy – Moritz Seider
Marc Staal – Gustav Lindström
Jordan Oesterle – Troy Stecher
Alex Nedeljkovic will start over Thomas Greiss on Thursday.

How can it not be Moritz Seider for Detroit? After everything we’ve heard about this guy over the last few years, it’ll be fascinating to see what he can do in the NHL. Will he be a top-four guy? Can he contend for the Calder Trophy … or even the Norris? Or will he end up on the third pair at some point during the season? We won’t learn the whole story today, but it’s time for Seider to fill the first page.
Anthony Cirelli is a two-time Stanley Cup champion who had a bit of a down season in Tampa last year after emerging as a top-line talent in 2019–20. At his best, he’s a tremendous two-way forward who can do electrifying things with the puck. Cirelli returning to his usual form in 2021–22 would be great for the overall entertainment value of the league.

You’ll be able to watch this game on Bally Sports Detroit. It’ll be broadcast over the airwaves on WXVT-FM 97.1 “The Ticket” in the Detroit area, as well as on the Red Wings’ official website.
If you’re watching the game on ESPN+ (or NHL LIVE in Canada), you’ll be able to see the Bolts’ stream on Bally Sports Sun. Once again, it’s scheduled to start at 7:30 p.m. ET.
Uncategorized
Recent articles from Mike Gould