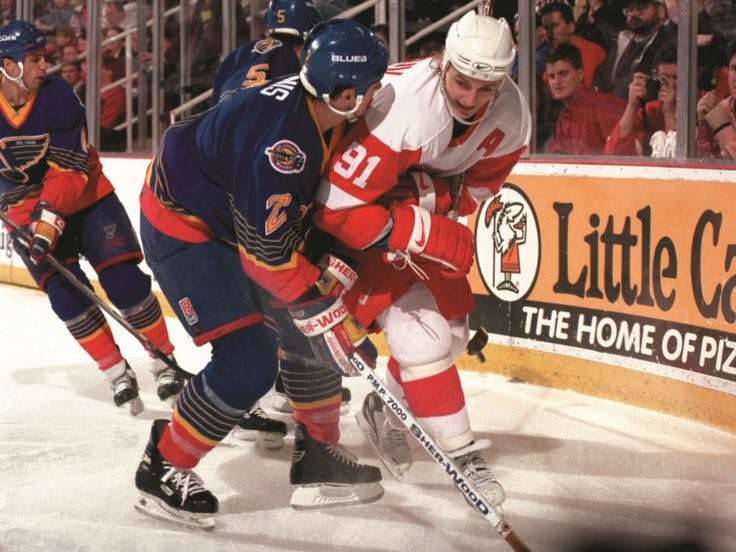 By Craig Jones
1 year ago
In light of the events surrounding Alexander Navalny and Russia announcing it’s new “team” name for the next two Olympics, it felt fitting to revisit Detroit’s Russian Five. In the summer of 1989, at the behest of Red Wings owner Mike Illitch, Jim Devallano started drafting Soviet born players. While the return on their investment was uncertain, Steve Yzerman told Devellano in regards to Sergei Fedorov “He’s better than me.” At that moment the decision to draft the Russian sniper in the 4th round was a no-brainer. This was the highest a Russian-born player had ever been drafted and the Wings followed-up this monumental pick by taking Vladimir Konstantinov in the 11th round. Yep, 11th round pick for one of the best blue-liners to ever lace ‘em up. Not too shabby
The Wings knew the Russian pipeline wasn’t dry and added to their arsenal with Slava Kozlov. Following a tragic car accident where Kozlov’s teammate was killed, the Wings persuaded the young talent to make his debut for the Wings on March 12th, 1992. Of course, Detroit was never one to sit on their laurels and Scotty Bowman was insistent on improving their defensive game. That’s when Ken Holland chatted with their Russian Sniper about trading for the 37-year-old Slava Fetisov. It should come as no surprise that Fedorov raved about the veteran and the impact he could have on the squad. Holland pulled the trigger and snagged the legendary D-man for a third-round pick. While the Wings would get swept by their Fetisov’s former New Jersey squad, the sun was clearly on the horizon. Credit to Ken Holland and Mike Illitch for pioneering the Russian movement, but without a doubt, the feather in their cap was trading for Igor Larionov. The addition of The Professor solidified the Russian Five and in only three days all the Ruskies hopped over the boards to make history.

1997 Stanley Cup Finals – Keep your head up around Konstantinov

At the time, hockey pundits had Eric Lindros and the Philadelphia Flyers as their overwhelming favourites to win their first Stanley Cup in 22 years. But Vladimir Konstantinov had different plans. While Konstantinov destroyed Trent Klatt in Game 1, it was the massive hit he delivered to Dale Hawerchuk in Game 3 that changed the course of events. Hell, you know it’s a big a hit when Kris Draper says it’s one of the biggest hits he’s ever seen. In the end, Wings fans got their brooms out and sent Big-E and the Flyers packing with Slava Fetisov and Igor Larionov skating together with the Stanley Cup proudly raised above their heads.

Wings fans and the Russian Five will never forget June 13th, 1997. The unfortunate series of events that allowed Slava Fetisov, Vladmir Konstantinov, Sergi Mnatsakonov to jump in a limousine with Richard Gnida, who had a suspended license after consecutive drunk driving convictions is absolutely heartbreaking. The stories of Darren McCarty and Brendan Shanahan trying to convince their friends not to leave strikes a chord with anyone who has seen their friends’ leave a party concerned for their safety. The tragic accident that left both Mnatsakanov and Konstantinov in a coma forever altered the Wings’ DNA, while simultaneously robbing Konstantinov from playing another game in the NHL.
Detroit has been built on adversity and hardship and, true to form, fans rallied behind their fallen soldiers to achieve the rare feat of back-to-back Stanley Cups. The Russian Five needed it, but so did the city. This tragic accident shook the entire state and, after being the pioneers of the Ruskie movement, they were determined to give their Russian heroes a proper send-off. And with The Production Line, The Grind Line, and The Russian Five, the Wings were clearly never afraid to shake-up the status-quo. The Russian Five didn’t just change the game, they changed the world. Rightfully so, Russians and Europeans are now entrenched in the NHL. They say soccer is the world’s game, but take a glance at any NHL line-up and hockey showcases and you’ll find diversity on every shift. None of this would be possible if it wasn’t for the Russian Five, hence why they have a permanent spot in Wings’ Folklore.
Twitter:@Jonesinthezone
IG:@Jonesinthezone
Content
Recent articles from Craig Jones