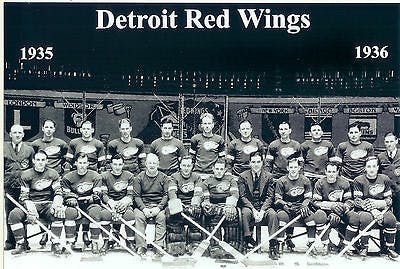 By Craig Jones
1 year ago
On March 24th, 1936, the Montreal Maroons and the Detroit Red Wings took the ice at 8:30 p.m. for Game 1 of their Stanley Cup Semifinals matchup. The Red Wings were led by their top scorers Marty Barrie and Larry Aurie. As well as two future Hall of Famers, Syd Howe, and Herbie Louis. The defending champion Montreal Maroons relied on Hooley Smith and their second-leading scorer, Baldy Northcott. Their bench boss was Tommy Gorman, who still holds the record as being the only coach to win consecutive Stanley Cups with two different teams. These were the two first-place teams, so the 10,000 fans at the Forum knew it was going to be a hard-fought game. But I doubt any of them thought they’d still be watching the same game the next day.
Thanks to some outstanding goaltending from Detroit’s Little Norm Smith and Montreal’s Lorne Chabot, regulation time ended without either side being able to light-the-lamp. The two heavyweight squads took the ice for the first overtime. No goals. Second overtime. No goals. Third overtime. No goals. Fourth overtime. No goals. Fifth overtime. No goals. Let’s not forget that this was 1936, so there wasn’t a Zamboni coming out to clear the ice between periods. Just some good ol’ sweeping. Anyone who’s played on an outdoor rink can empathize with how difficult skating and handling the puck can be on a carved-up sheet of ice. Combine the rough conditions and great goaltending and you can understand why it took until 2:25 a.m. for the deadlock to be broken.
At 16:30 of the sixth overtime period, Hec Kilrea flew down the wing and tossed a pass over to rookie Modere ‘Mud” Bruneteau. What makes this story even crazier is that Coach Adams waited until the sixth overtime to give Bruneteau his first shift and his fresh legs were the obvious difference-maker. And to the disappointment of Montreal fans, the rookie was able to beat Lorde Chabot. This lone goal gave Detroit the win and a 1-0 series lead. Despite the lack of scoring, this game would have been amazing to be at. As a fan, who wouldn’t love getting six free periods of hockey and watching warriors battle for 176 minutes and 30 seconds?
The Wings would go on to sweep the series with the Maroons and meet the Toronto Maple Leafs in the Stanley Cup Finals. This Wings squad made history twice by setting the record for the longest NHL game, but more importantly, they raised Detroit’s first-ever Stanley Cup. In regards to Montreal, this game turned out to be a real sliding doors moment for the Maroons. The former champions lasted only two seasons before succumbing to financial troubles during the Great Depression. The Maroons were forced to suspend their operations, and despite several attempts at reviving the squad, they became the only franchise in history to have won the Stanley Cup and either fold or be relocated.
While the Wings and Maroons still hold the record for the longest NHL game. In 2017, the Storhamar Dragons defeated the Sparta Warriors in the eighth overtime of a Norweigan League game. Having said that, doing it with the sports technology that we have in modern times, is a whole lot different than doing it in 1936. To put it in perspective, in the same year the Wings set the record, Jesse Owens won four Gold medals in Berlin, the Hoover Dam was completed and Babe Ruth turned down the Reds’ offer to make a comeback. Of course, anyone that can play hockey for that long is tough-as-nails and deserves the utmost respect. But doing it without Zambonis, helmets, and Gatorade makes it that much more remarkable.
Twitter:@Jonesinthezone
IG:@Jonesinthezone
Content
Recent articles from Craig Jones