Fifth round sleepers for the Detroit Red Wings 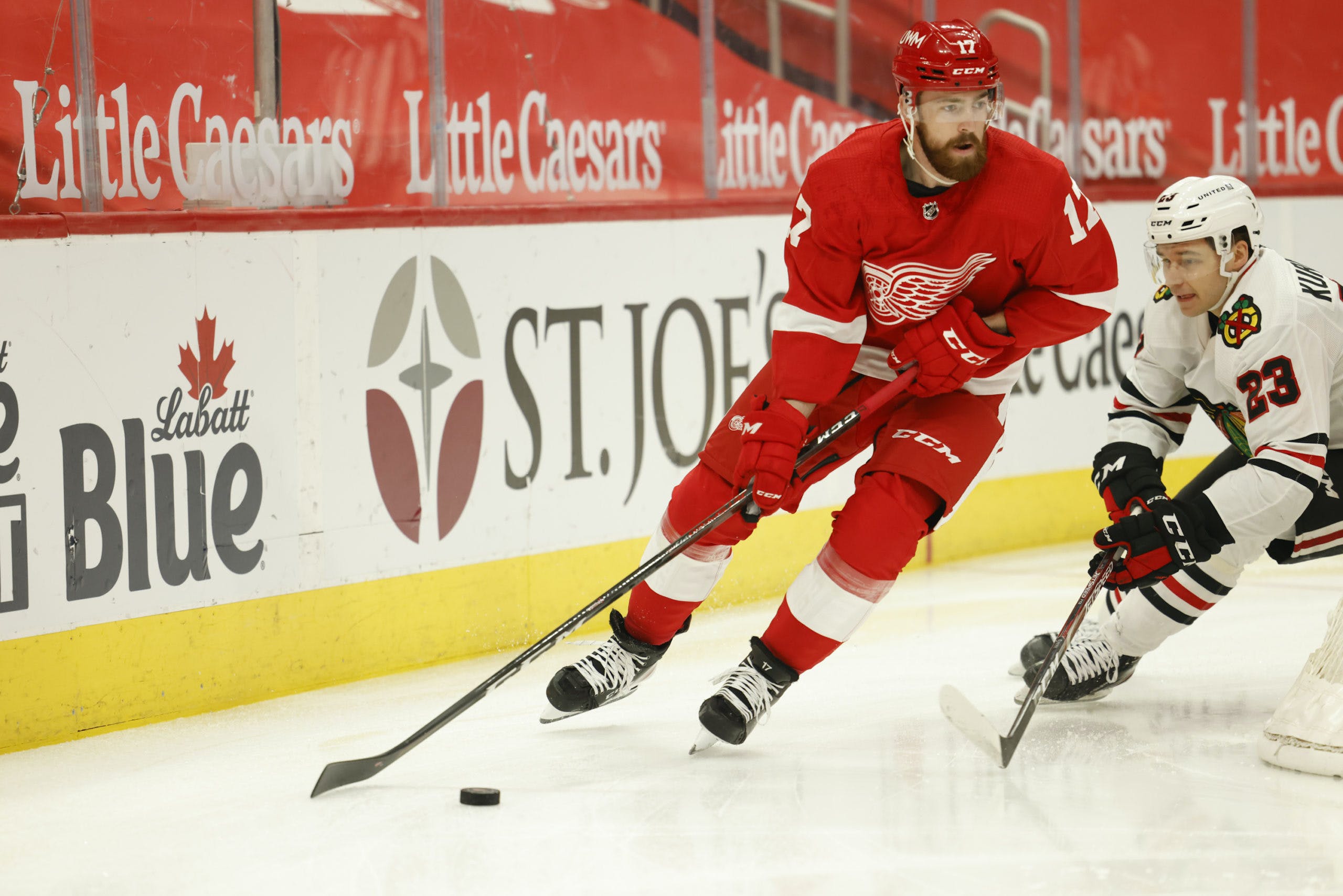 By Nation World HQ
1 year ago
By Austin Broad
FCHockey Contributor
There will be more misses than hits at the 2021 NHL Draft. History has shown this.
It’s a law of diminishing returns, too.
The later in the draft you get, the longer the odds that your pick-turned-prospect will blossom into an NHL player, much less an NHL star.
And whether you feel the 2021 NHL Draft class is lacking in punch, power, or prestige, it isn’t without its intrigue.
Undoubtedly, most prospects will fizzle. It’s the nature of the game. But some will hit, blossoming into an NHL player that’ll leave fans and organizations alike wondering what one team saw that 31 others didn’t. Many of those will come beyond the first round.
With that, here are five targets from the class that could hit, and your team should consider selecting in the fifth round of the 2021 NHL Draft:

William Trudeau is the type of defenseman that uses his skating ability to drive play in the transition game. He has good acceleration and has good puckhandling skills that allow him to be effective on controlled zone exits/entries. Trudeau, who has a solid physical frame, standing at 6-foot-0 and 189 pounds, is capable of driving transitional play and can chip in with offensive production. He had 31 points (eight goals, 23 assists) in 40 games for the Islanders.
If you’re looking for a high-ceiling offensive defenseman, then you want your team to be all over Trudeau in the fifth round.
“Trudeau is a mobile puck-rushing defensemen who deeply enjoys creating breakouts through puck carries, and supporting the rush,” FCHockey scout Andy Lehoux said. “He showed great anticipation and offensive instincts on breakouts, activating on the wing to give a dynamic outlet option to his partner or proactively jumping into rushes to outnumber the opposition. Trudeau owns intriguing tools as a mobile offensive blueliner and could be a great bet for the later rounds.”

Valteri Koskela is a left-handed defender who has shown flashes of high-end ability at both ends of the ice. He has good stay-at-home tendencies and flashes the ability to jump up into the rush to help generate offensive chances for his team. With a slighter, 5-foot-10, 157 pound frame he has room to grow physically, but he showed well in his 33 Liiga games during his draft year.
Koskela, who had eight points (one goal, seven assists) for JYP last season, has potential at both ends of the ice, and with a lot of room to mature physically, he is a name worth monitoring once the fifth-round rolls around.
“Koskela is a versatile defender who uses his strong skating to give him an advantage at both ends of the ice,” FCHockey scout Curtis Schwartzkopf said. “He has good awareness for positioning whether defending or attacking and did well in Liiga this past year where he did not look out of place. Koskela is a late round flyer who has a lot of potential.”

Matier is a high IQ defender, he makes quick decisions at both ends of the ice and uses his mobility to help him impact the game on both offense and defense. He missed a crucial development year with the OHL losing its season to the pandemic, but his skillset and his tape from the 2019-20 season are enough to have him in the conversation as an intriguing fifth-round option.
He has impressive physical traits, standing at a towering 6-foot-4 and weighing 200 pounds he has room to add more weight to his frame. The team that drafts him will likely do so on the merits of his physical traits, but there’s enough room to grow in his game and if developed properly he could be a solid shutdown defender for years to come in the NHL.
“Matier is a smart defenseman who has good gap control, keeping opponents to the outside and limiting their chance of creating scoring chances,” FCHockey scout Mat Sheridan said. “He moves the puck well in transition and battles hard to clear the front of his net. Tends to watch the play too often at times and could benefit on adding more strength to his frame.”

Lucas Forsell is a high-paced winger who brings a ton of potential to the game. When he has the puck on his stick, he is a must-watch player who is capable of pulling off highlight reel plays on a regular basis. Forsell is a great playmaker, he has great passing ability and uses his elite level vision to take advantage of passing lanes both off the rush and in the offensive zone. He put up 11 points (four goals, seven assists) in 13 games for Farjestad J20.
He has a ton of offensive potential and has shown the ability to drive play from the wing. If you can find a player who has Forsell’s upside in the fifth round you absolutely have to take a chance on him.
“Forsell is a speedy winger with good offensive instincts and puck skills,” FCHockey scout Viktor Bergman said. “His first instinct is to attack the middle of the ice and is a threat with both his passing skills, where he is always looking to set up a teammate, and his shot. He is also a hard worker who never stops competing on the ice, whether it is on backcheck or forecheck.”

Cameron Whynot is a capable two-way defender with a package of skills that allows him to have positive impacts in all three zones of the ice. Using his long legs, Whynot generates a ton of power behind his stride and can effectively navigate his way up and down the ice. He had solid offensive production in his draft year, scoring 23 points (six goals and 17 assists) in 34 games for the Mooseheads.
When he chooses to be, Whynot can be effective in the transition game. With decent vision and passing ability he can make effective breakout passes, allowing his team to switch from defense to offense quickly.
“Whynot is a puck-rushing defensemen who excels at finding open paths to the offensive zone and skate around forecheckers with poise,” Lehoux said. “If Whynot refines his ability to take quick, efficient decisions on the zone exit, he could translate into a top 4 defensemen at the next level.”
Austin Broad is a scout and contributor at FCHockey.
Nation Network readers can get 25% off FCHockey’s 2021 NHL Draft Guide with promo code NATIONNETWORK. Unlock your savings at checkout!
Uncategorized
Recent articles from Nation World HQ