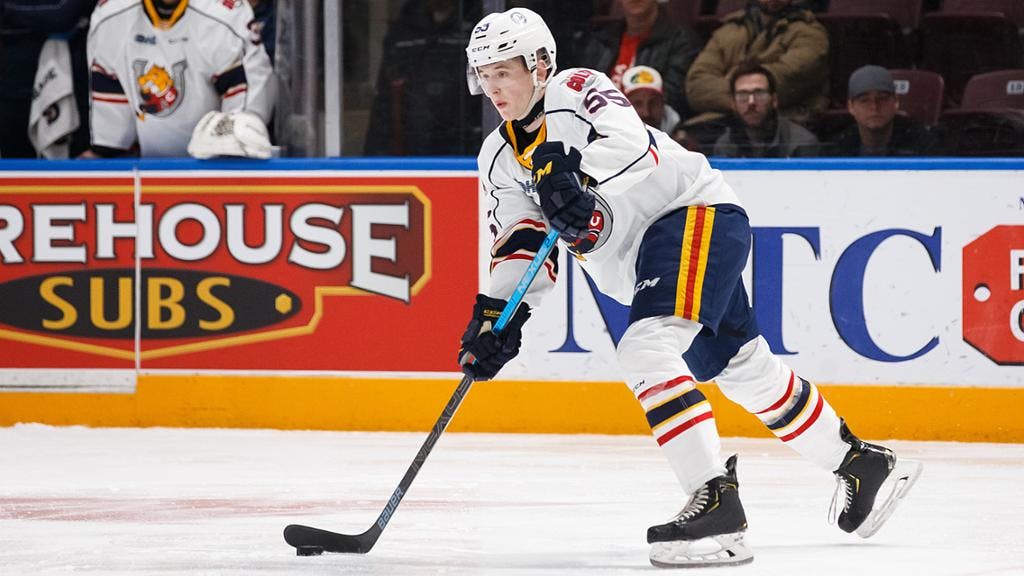 By Craig Jones
1 year ago
The search for a top-pairing right-shot defenseman has taken on a mythical status in the modern-day NHL. It’s a void that teams are constantly looking to fill, and the likes of Erik Karlsson, Drew Doughty, Dougie Hamilton, and Shea Weber have proven that once you fill it, good things are bound to ensue. And while it’s unfair to compare Brandt Clarke to the aforementioned veterans, the Ontario native has the talent to potentially lining up against them in the near future. But like many other young athletes, the former Barrie Colts stud had his season canceled due to COVID-19. Luckily, in a glimmer of hope, Brandt and his brother Graeme were loaned out to HC Nove Zamky in the Slovakian Extraliga League to hone their skills during the pandemic. The prospect tallied 13 points in 26 games and boasted a +6 plus/minus. There are some talented defensemen in this year’s draft, but I wouldn’t advise sleeping on Brandt Clarke. The kid is gifted with defensive accountability, offensive potential, and the ability to disrupt an opponent’s timing that even a layman can appreciate.
Draft Countdown – #7 – Brandt Clarke
D.O.B – February 09, 2003
Nationality –Canadian
Draft Eligibility – 2021
Height –6’1
Weight –181 lbs
Position – Defense
Handedness – Right
Let’s be honest, the end of days is nearing for the lockdown defensemen. The modern league demands puck-moving, counter-attacking, goal-scoring defensemen. While this doesn’t make him a shoo-in for a future Norris trophy, Brandt Clarke certainly fits the criteria with his pedigree. The youngster has a certain je ne sais quoi when he pounces for the puck. I’d describe it as it looks like an accident, but you can tell it’s deliberate. It’s odd, but awesome at the same time. And let’s be blunt, whether it’s blocking the lanes, capitalizing on an opponents’ mistake, or “accidentally” taking out some legs, Clarke does his job, and he does it like nobody else in the draft.

There is no denying the former member of the prestigious Don Mills Flyers has battled a tremendous amount of adversity. COVID-19 has affected every single one of us, but athletes have had it a little different. Practice, training, recovery, and anyone that’s played sports knows, practice ain’t the game. The OHL 2020-21 season was canceled, yet somehow the players’ skills, endurance, and experiences have survived during the pandemic. It reminds me that evolution states – ‘only the strong will survive.’ We need time to tell if Clarke will adopt this mentality, but perseverance and his continued dedication to being a top-level defenseman will undoubtedly help overcome this (hopefully) once-in-a-lifetime- pandemic.
The defensive prowess of the Canadian prospect is undeniable, but his skating and offensive impact need some improvement. Clarke has the unfortunate label of having bad balance, which as a defenseman is far from ideal. There’s no denying that the days of the ‘95 New Jersey Devils trap are a thing of the past. While the league, refs, and players want more goals. Every franchise knows they need defensive accountability in the playoffs when the refs decide to pocket the whistles. Fans may love the 5-4, 7-5 games, but this isn’t the 80s. Goals are going to end 1-0 or 2-3, so what do you do? I say you invest in defensemen like Brandt Clarke who possess impressive passing skills, strong ice vision, and passing skills that can break ANY team’s defensive tactics
Overall, I wouldn’t recommend sleeping on Clarke. In all likelihood, the other top-ranked defensemen will be taken before Clarke. Guess what? That’s okay. This prospect isn’t going to forget the talent that was drafted before him, and I’d bet he uses it at motivation. Clarke wants to be the best, and that extra draft motivation will only add fuel to the fire. In the end, what he lacks in experience (COVID-19), he makes up with work ethic, size, and talent. I don’t know about you, but I’ll take the latter over the former any day of the week. If the Wings end up drafting the young Canadian D-man over all the others, I have to believe Stevie-Y sees something special. And in Stevie we trust!
Check out the previous profiles on:
#10 – Xavier Bourgault
#9 – Jesper Wallstedt
#8 – Chaz Lucius
There’s no denying that familiarity breeds loyalty. That’s exactly why it’s best we get to know the future members of the club, because win or lose, the fans need to know who their cheering for.
Twitter:@Jonesinthezone
IG:@Jonesinthezone
Content
Recent articles from Craig Jones