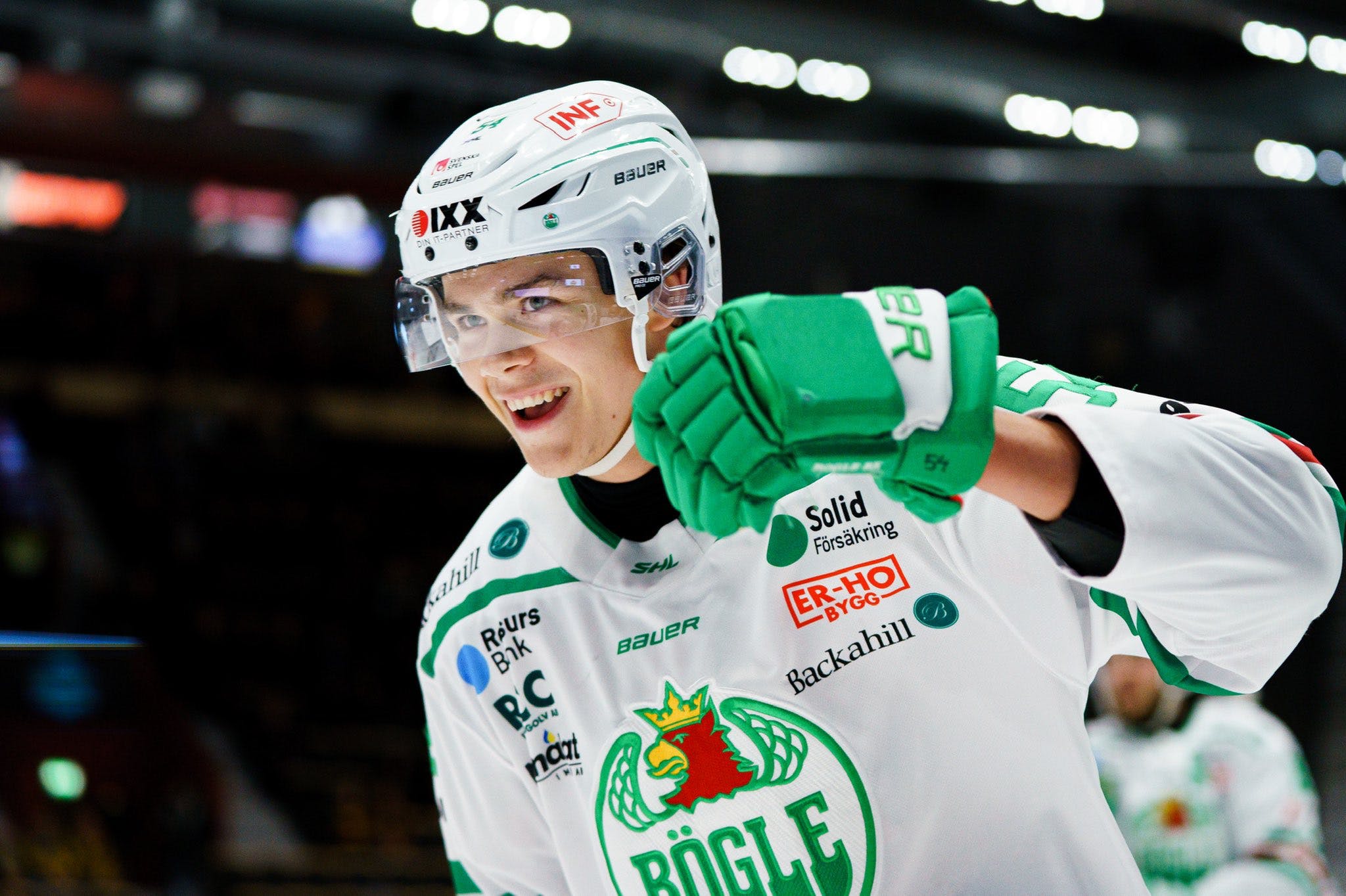 By Scott Ony
9 months ago
Swedish players have excelled with the Detroit Red Wings for decades — here’s looking at you, Nicklas Lidstrom and Henrik Zetterberg — and it looks as though that trend will continue into the immediate future.
Rookie winger @Lucas Raymond is currently third on the Red Wings in scoring and is among the favorites for the Calder Trophy. 23-year-old defenseman @Gustav Lindstom has been one of the most consistent players on the team all season long.
In his first year with the Grand Rapids Griffins of the American Hockey League, 21-year-old forward Jonatan Berggren ranks second in team scoring with 33 points in 41 games. As we’ve discussed here at WingsNation, Berggren already looks to be destined for the NHL.
On top of all that, several Red Wings prospects are currently developing in Sweden. Simon Edvinsson is the most noteworthy — we’ve also covered him at length — but there are others making waves in the Swedish Hockey League this season.
Here are four prospects in the SHL that could trade in their existing colors for the winged wheel in the near future.

Selected 32nd overall in the 2020 draft, this 19-year-old defenseman (pictured above) has emerged as a force for Rögle BK this season.
With four goals and 11 assists in 33 games, Wallinder’s 15 points put him in first place among U20 players on the SHL scoring leaderboard.
Wallinder’s point totals are made more impressive considering this is his first season playing in the SHL. He recorded just six points in 43 games with MoDo in the second-tier HockeyAllsvenskan league in 2020–21.
Standing 6’4″ and weighing 190 pounds, Wallinder has everything you could want in a defenseman. His skating is effortless, he boasts a heavy shot, and he’s capable of controlling play on most of his shifts.
As a left-shooting defenseman, Wallinder is exactly what the Red Wings need. Danny DeKeyser, Nick Leddy, and Marc Staal are all set to become unrestricted free agents this summer, potentially leaving plenty of room on the roster for a player of Wallinder’s talents. (His current SHL contract expires in 2023, although it’s possible the Red Wings could sign him earlier).
That said, there’s no rush for the young defenseman to immediately make the jump to the NHL. Playing out his SHL contract would be beneficial for Wallinder’s development, but both Grand Rapids and Detroit are also legitimate possibilities for next season. Still, Wallinder will need an entry-level deal to make either of those destinations feasible.

Arguably the most intriguing prospect on this list, 6’8″, 238-lb. winger Elmer Söderblom is a rarity in the hockey world. There are very few players with his size in this sport (and hardly any of them are forwards).
A sixth-round pick back in 2019, Söderblom is in the midst of a breakout season playing for Frölunda in the SHL. With 16 goals, he leads the team by seven; his 23 points in 37 games rank third on Frölunda.
The first thing everybody notices about Söderblom is his size, but he’s also extremely skilled for such a large player. He likes to have the puck on his stick and often makes plays you don’t typically see from enormous players.
A former teammate of Lucas Raymond and current teammate of Red Wings prospects Simon Edvinsson and Theodor Niederbach, Söderblom is as natural a fit in Detroit’s system as a North Dakota Fighting Hawk is in Ottawa.
Söderblom’s size and net-front presence should be enough for him to get a look in the NHL. His high skill level is what will keep him there. First Holmstrom, then Franzen, now… Soderblom?
With Söderblom’s SHL contract set to expire this summer, it’s possible he could be in North America as early as next season. Look for him to possibly start the 2022–23 season playing in Grand Rapids (either on an AHL deal or — more likely — an NHL entry-level contract).

Like Wallinder, Niederbach was also a second-round pick of the Red Wings in the 2020 draft. After putting up 48 points in 40 games with Frölunda’s team in the Swedish J20 Nationell league, Detroit selected him 52nd overall.
Niederbach is in his first full season with Frölunda’s SHL team (playing as Söderblom’s teammate). After posting just eight points (four goals, four assists) in his 35 SHL games, he has three goals in his last two contests.
At 19 years old, Niederbach even being a regular in an SHL lineup is an accomplishment. He’s one of just 12 players drafted in 2020 to play at least 25 SHL games this season. Expect Niederbach to play an expanded role for Frolunda next year and potentially become one of the team’s top scorers.
A highly skilled offensive player with impressive hockey IQ, Niederbach projects to potentially develop into a solid middle-six winger in the NHL. His game compares well with that of former Red Wing @Gustav Nyquist.
Niederbach will need at least one more season in the SHL (and likely two) before coming over to North America. Next year will say a lot about his chances of one day becoming an NHL regular.

At age 21, Johansson is the oldest and the most NHL-ready player on this list. He’s also the only one with an NHL contract.
Drafted 60th overall by the Red Wings in 2019, Johansson has spent the last three seasons playing for the SHL club Färjestad BK. With over 100 games of experience in the top-tier Swedish league, Johansson is likely ready to make the jump to North America next season.
Thus far in 2021–22, Johansson has already surpassed his SHL career-high with 21 points in 40 games. Last year, he managed 19 points in 44 games; the season prior, he scored 13 in 42.
Standing 6′ and weighing 176 pounds, Johansson won’t overpower players physically, but he already resembles successful NHL defensemen with his intelligence and ability to distribute the puck.
Johansson has two years remaining after this one on his NHL entry-level contract. This could be his final season developing in Sweden before he makes the transition over to North America this summer.
With few left-handed defensemen currently committed to the Red Wings organization beyond this year, Johansson will likely be given an opportunity to force his way onto the team in training camp prior to next season. Even if he doesn’t immediately become a full-time player in Detroit, Johansson could certainly see NHL games in 2022–23.