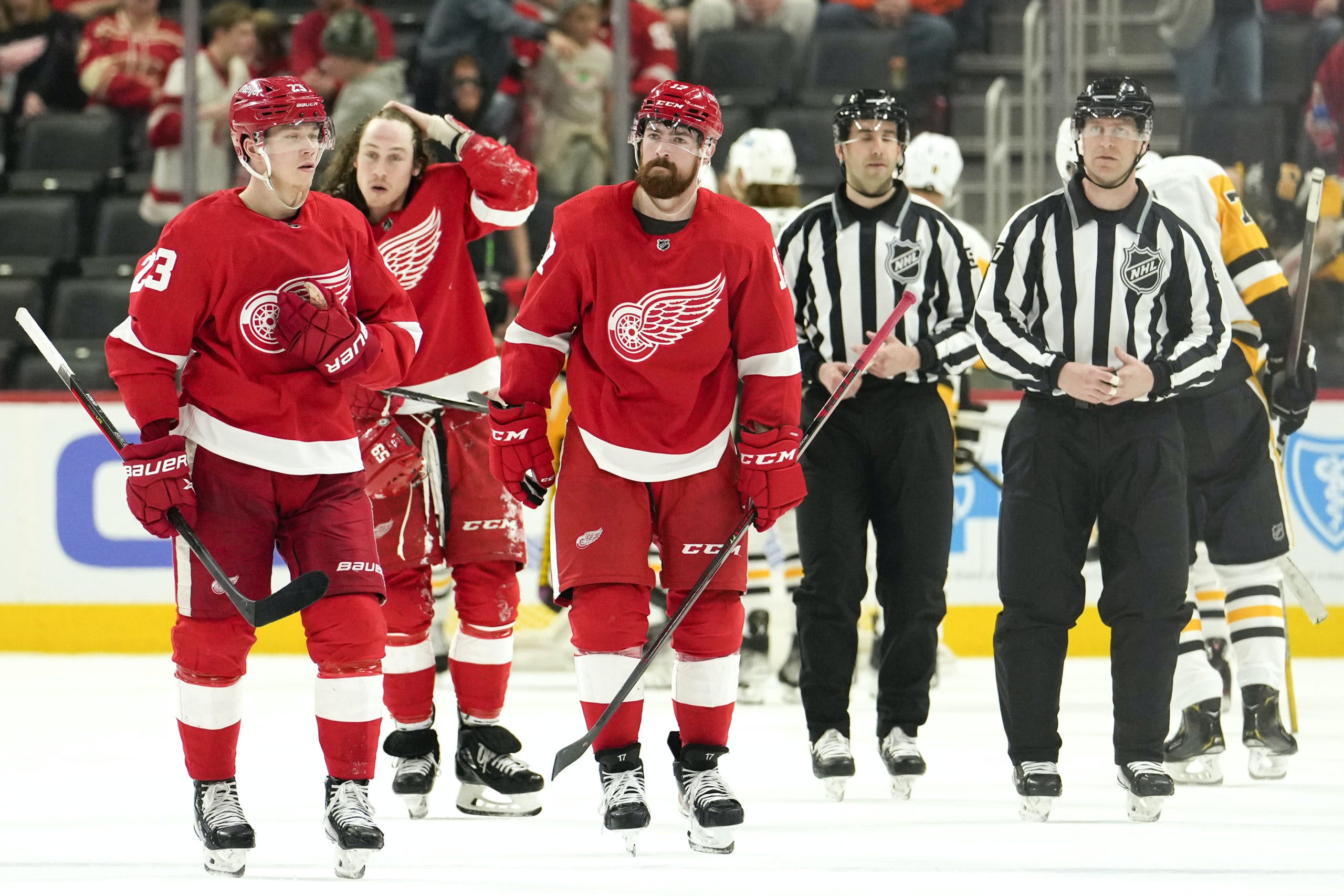 By Mike Gould
7 months ago
The Detroit Red Wings have not been a particularly strong defensive team this season, to say the least.
The Red Wings have now allowed a league-worst 306 goals in 79 games this season. Entering this year, Detroit had not allowed more than 300 goals in a single campaign since 1989–90 (which was also the year before the team’s 25-season playoff streak began).
On Saturday, the Red Wings continued their recent defensive futility by giving up seven goals in a lopsided loss to the Pittsburgh Penguins at Little Caesars Arena.
Detroit goaltender @Thomas Greiss was pulled in favour of @Alex Nedeljkovic after two periods, with the goaltending tandem collectively stopping just 31 of the 38 shots they faced in the game.
@Jakub Vrana and @Michael Rasmussen combined to briefly tie the contest at 2–2 with back-to-back goals around the 20-minute mark of regulation time, but the Penguins roared back with five consecutive goals of their own to close out a commanding 7–2 victory.
@Evgeni Malkin led the way for Pittsburgh with a pair of goals; @Chad Ruhwedel, @Sidney Crosby, @Rickard Rakell, @Kris Letang, and @Danton Heinen also tallied for the Penguins. Visiting goaltender @Casey DeSmith allowed just two goals on the 25 shots he faced for his 10th victory of the season.
The Red Wings have now allowed seven or more goals on 10 different occasions this season, including games where they allowed 10 and 11 goals. No other team has given up double-digit goals in a game this year.
Across the entire National Hockey League, a team has only given up at least seven goals in 95 different games this year. By themselves, the Red Wings have accounted for 10.5% of those games.
According to Prashanth Iyer, the last team to give up seven or more goals more times than the 2021–22 Red Wings was the 1995–96 San Jose Sharks. En route to a miserable 20–55–7 finish in their fifth season of operation, the Sharks allowed seven or more goals on 14 separate occasions in 1995–96.
Now with just three goals remaining on their 2021–22 season schedule, the Red Wings (30–39–10) will return to action on Sunday afternoon to take on the New Jersey Devils (27–43–8) at the Prudential Center in Newark.