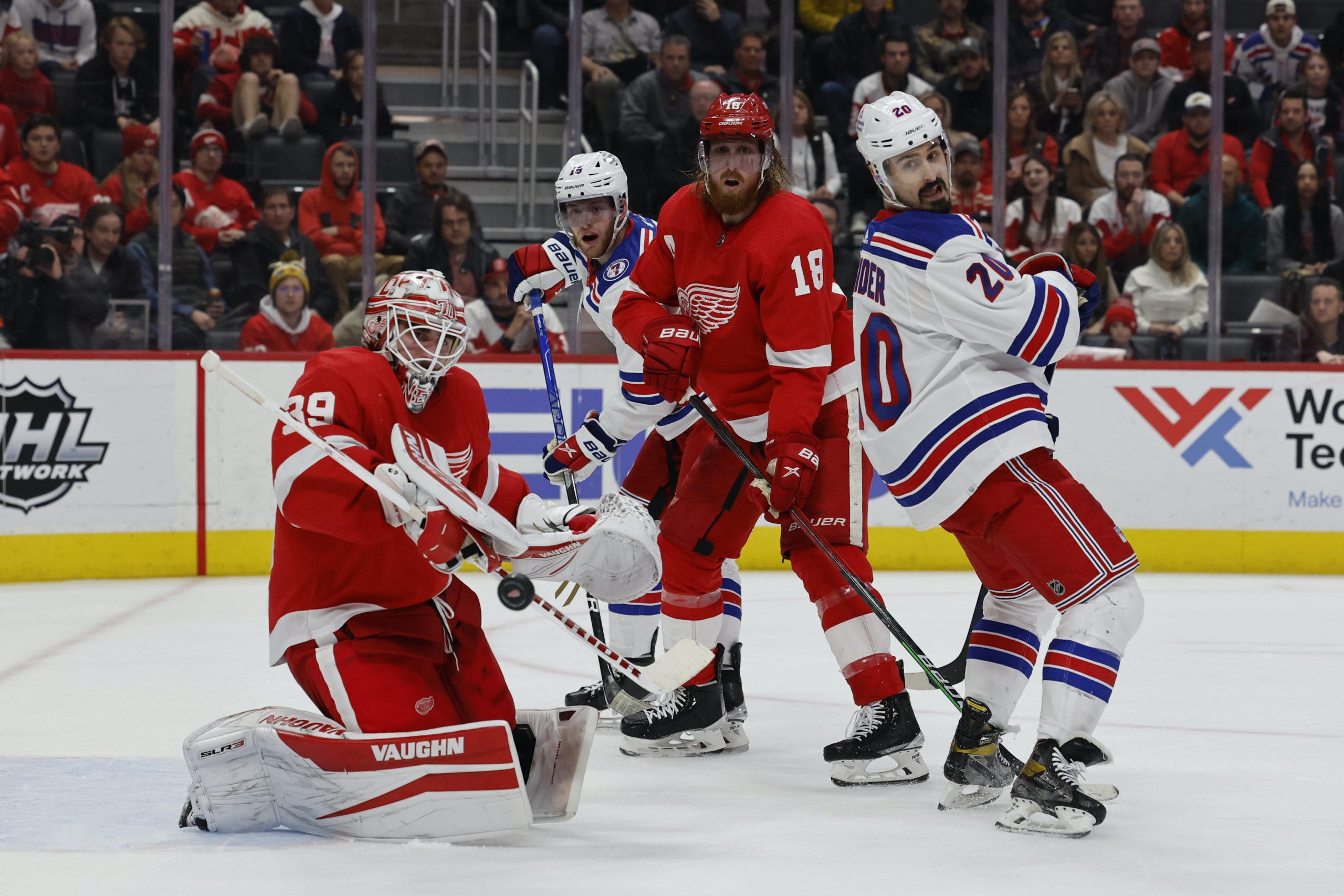 By Mike Gould
8 months ago
Well, at least they didn’t allow 11.
It would’ve been difficult for the Detroit Red Wings to sink much lower in the wake of their 11–2 defeat at the hands of the Pittsburgh Penguins on Sunday.
While they still struggled at times to keep up with the New York Rangers on Wednesday, the Red Wings managed to take three one-goal leads in the game (including one in the third period).
Still, these are the 2021–22 Red Wings. Entering Wednesday’s action, the Red Wings had won just three of their last 15 games. Even after @Adam Erne scored to make it 4–3 for Detroit with 14:04 to play, a Rangers tying goal felt inevitable.
The visitors really pushed for the equalizer in the final frame, outshooting the Red Wings 13–5 in the last 20 minutes. When @Gustav Lindstrom took a high-sticking penalty at the 15:47 mark of the period, the Rangers took the opportunity to strike.
@Chris Kreider led the Rangers with six shots in Wednesday’s game. He was all around @Alex Nedeljkovic’s crease all night long and finally beat the 26-year-old goaltender on the late power play, banking the puck off @Moritz Seider and right inside the far post.
Kreider, 30, entered 2021–22 having never scored more than 28 goals in a single season. Including his late game-tying tally against the Red Wings, Kreider now has 46 goals this year. (Yes, you read that right).
@Michael Rasmussen, @Tyler Bertuzzi, and @Jakub Vrana also scored for the Red Wings in regulation on Wednesday. @Alex Nedeljkovic stopped 29 of the 33 shots he faced in the first 60 minutes.
Seider picked up a pair of primary helpers in the contest; with his secondary assist on Bertuzzi’s marker, @Lucas Raymond became the 13th rookie in Red Wings history to score 50 points.
It didn’t take long for the Rangers to break the 4–4 deadlock in overtime. After the Red Wings mustered the first two shots of the extra frame, the Rangers took possession and managed to exploit @Filip Hronek and @Pius Suter on the rush to win the game.
New Ranger acquisition and Ann Arbor product @Andrew Copp scored the deciding goal in OT off a give-and-go play with @Artemi Panarin. Copp’s second as a Ranger and 15th of the season sealed the deal at the 1:34 mark of the extra period.
The Rangers’ winning goal came on their first shot of overtime. Through 61:34 in the game, the Red Wings were outshot 34–26.
Wednesday’s contest was the first for Red Wings defenseman Danny DeKeyser since March 5. The 32-year-old rearguard extended his own personal point streak to three games with a nice secondary helper on Rasmussen’s goal in the first period.
In 44 games with the Red Wings this season, DeKeyser has seven points (all assists).
The Red Wings fell to 26–32–9 with the loss; the Rangers improved to 44–19–5. Up next at Little Caesars Arena: the Ottawa Senators (23–37–6) come to town for a date with the Wings on April Fools’ Day.