Of course, each new league year starts on July 1, which also means the unrestricted free-agent market opens up. If 2016 taught us anything, NHL teams can’t get over the hump by chasing the second tier of players available. Not to long ago, the strategy going in was to land a prominent name, even if you have to overpay, because, well, that’s just how the market works. In the end it could all be worth it. Or so we thought.

The list of contracts handed out on that warm summer day is frightening, to say the least.

The Red Wings were one of the many teams that foolishly went after a UFA over the age of 30. After (supposedly) missing out on Steven Stamkos, the big fish of this UFA class, they opted for Plan-B: Inking 32-year-old Frans Nielsen to a 6-year, $31.5M contract.

The initial return on the Nielsen signing was decent. A 17 goal, 41 point campaign during his first season with Detroit was as good as it got. Nielsen was a key contributor on the powerplay, and served in a two-way role while a maturing Dylan Larkin was still figuring things out.

The best days of Nielsen’s contract are already past us, unfortunately. Whether he lived up to the former regime’s expectations or not, all that really matters now is what is ahead.

Frankly, the former New York Islander has been one of the worst players in the NHL this season. Through 19 games, Nielsen remains without a point, putting him on track for a massive drop in production from 2018-19, where he scored at a clip of .486 points per game. Among players this season still without a point, Nielsen has played the most minutes of all of them (254.72 TOI).

Since originally signing in 2016, Nielsen’s play has dropped off in each of his four seasons with the Red Wings. The 2016-17 season was his best season in the Winged Wheel, but even that was just an average season statistically. A sign this pact was doomed early on.

A truly rapid decline, but this isn’t overly surprising for a player well into his thirties. The current state of his play has reached unsettling lows. In both CF% and xGF% among forwards with at least 200 minutes played at 5-on-5 this season, Nielsen ranks in the bottom ten of both categories league wide, the latter of which Nielsen is second last in.

Order of ranking from worst to best

Nielsen’s offensive presence is incredibly limiting, which creates a larger impact with him being a center. Without Nielsen on the ice, Detroit’s offense, while still below league average, is significantly better in the offensive zone. 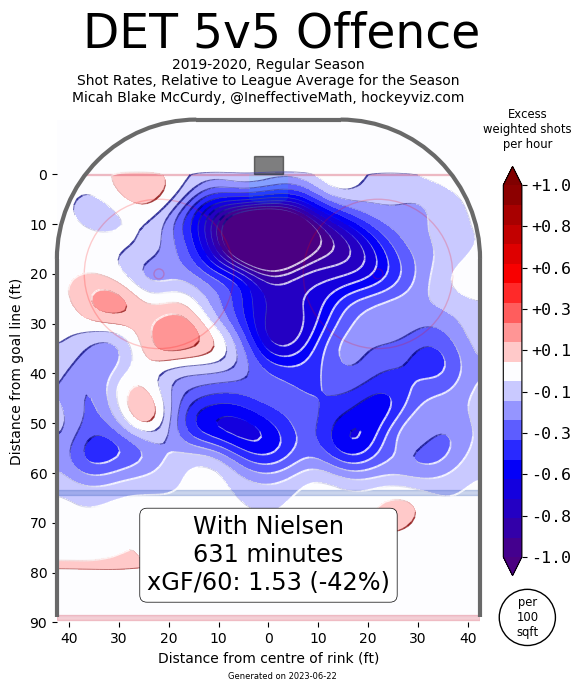 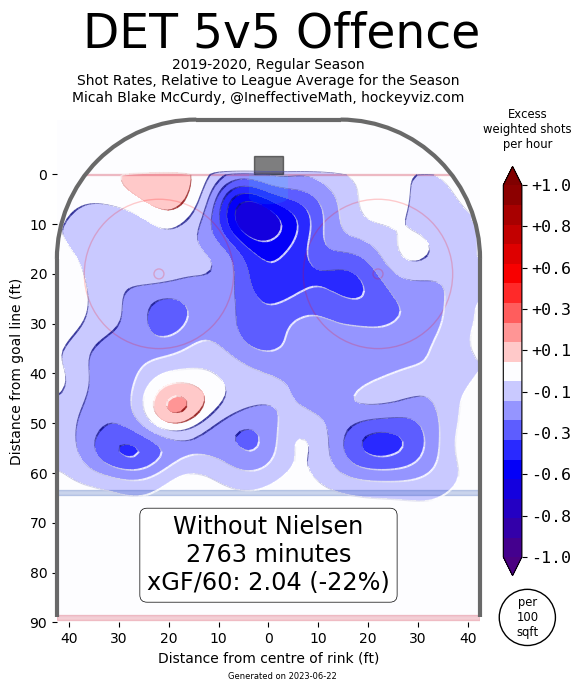 Just looking at the pure production, no powerplay time doesn’t help either. In 2016-17 Nielsen lead Detroit in 5-on-4 scoring with 15 points, leading the team by a decent margin. If Jeff Blashill wants to do something to help his cause, I’m sure a spot can be opened up on the second powerplay unit.

Nonetheless, still signed for another two seasons after this one, the Red Wings have a conundrum on their hands. That’s quite a long time to try and salvage as much of his play as possible. Detroit, of course, is no stranger to ugly long-term contracts, but counterparts in Darren Helm and Luke Glendening still have something to offer, at least. Nielsen, however, is getting to a point where its tough to justify powering through the remainder of his contract.

Unlike Justin Abdelkader, a buyout could be a realistic turning point. Cap space does play a slight role when considering a buyout, as Detroit has big names like Anthony Mantha, Andreas Athanasiou, and Tyler Bertuzzi becoming restricted free-agents this upcoming offseason. They’ll all be due for a raise. However, the main reason to ponder a potential buyout is to free open a roster spot, and overall improve the play on the ice.

If the Red Wings execute a buyout this upcoming summer, they’d have Nielsen on the books for four more seasons, but will rack up some savings the first two. The last two years they would only have to eat $666,667. With a rising cap, that is not a major burden to harp on.

Compared to a buyout the following year in 2021, the difference is not that much. They’d have Nielsen on the books for two more years after that, and would only have to eat $500,000 in dead space for the last year. Having to only carry an extra $100,000 for an additional year, it certainly makes sense to opt out a little earlier, in 2020.

As much as buyouts are meant for a last-resort option, the value is greater in this sense — addition by subtraction. Nielsen’s veteran presence is certainly an important aspect to the locker room, but another two years is a tough pill to swallow. With younger players coming up through the system, its only a matter of time before this situation starts to become inevitable.