As you know, Evgeny Svechnikov has been up and playing with the big club, after being called-up last week. Well, if you want to call it “playing”. In the seven games that he’s skated, he ranks second to last in TOI/G among all Red Wings, as he has failed to crack ten minutes in a game yet. 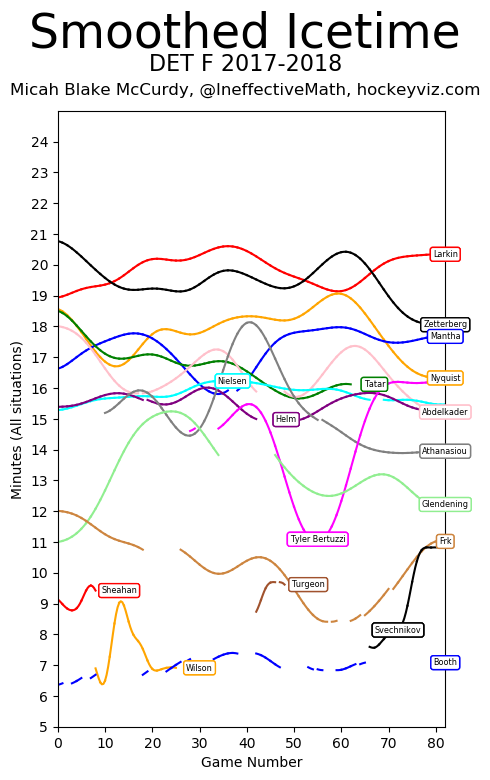 If you look towards the bottom on the right-hand side of the above chart, you’ll see Geno chilling down their with Luke Witkowski. Not playing on special teams will hurt the minutes he gets, but at this rate, using one of the limited call-ups on him seems useless. With the Wings on the brink of being mathematically eliminated from the playoffs, this should be the time to get a good look at him in the next two games, as the most likely scenario is he’ll be sent back to Grand Rapids, so his ELC can slide another year.

Has he played particularly well? I would say he hasn’t been bad. Because of his limited ice-time, there isn’t much in terms of statistics that approve or disapprove of him being worthy of more ice-time, but that wasn’t the reason he was called-up. It was to get him some NHL action, and act as almost an early try-out for next season’s team. We’ve seen some good signs from him, like scoring his first NHL goal. We’ve also seen the ugly, like being too weak on the puck and in battles. There are things to work on, that is how development works for rookies just entering the league. And with more ice-time, we’ll have a much better showcase of what he can do at the highest level. That means special teams, and better line-mates. Insert X winger on his line, but Dylan Larkin would make the most sense to center him, being an all-around center who was in his position just a few years ago.

And it looks like Jeff Blashill got the memo:

i thought he took a step in the right direction, tonight, in terms of earning more ice time.

Now we’ve seen Blashill promise more ice-time to younger players in the past, and were left with disappointment as they would still be riding the bench. So we’ll have to stand pat until then, but hopefully he will see the light.