Niklas Kronwall was, at one point, a defenseman all other teams were envious of. In 2008-09, he played on average 22:54 per game, put up 51 points, and recorded a CF% of 58.2%. Last season, Kronwall still played an average of 22 minutes per game, but only put up half of the points (26) and recorded a CF% of 48.8%. Kronwall never topped his numbers from 2008-09, but he was Detroit’s number one defenseman for several seasons after the retirement of Nick Lidstrom. The last couple of seasons weren’t pretty, though, as Kronwall entered into a decline that he won’t be coming out of.

Kronwall was drafted 29th overall in the 2000 NHL Entry Level Draft. He played in the Swedish Elite League, for Djurgardens IF Stockholm, until 2003-04 when he joined the team in Detroit, splitting his season between the Red Wings and Griffins in Grand Rapids. The following season, during the lockout, Kronwall played the full season with the Griffins where he led the team in points with 53.

That would be the end of Kronwall’s AHL career as he would join the Wings full time the following season. He contributed to the Wings 2008 Stanley Cup Championship and in 2008-09 had a career season, as discussed above. Kronwall is a four time NHL All-Star and one of the the 26 members in the Triple Gold Club. He was part of Sweden’s 2006 Gold Medal Olympic and World Championship victories.

Kronwall has always been known for his physical play. The term “Kronwalled” was coined when he would lay out players of the opposing team as they tried to breakout of their zone. Sadly, due to the NHL Department of Player Safety catching on to him leaving his feet and the deteriorating state of his knees, we haven’t seen anyone Kronwalled in a long time. 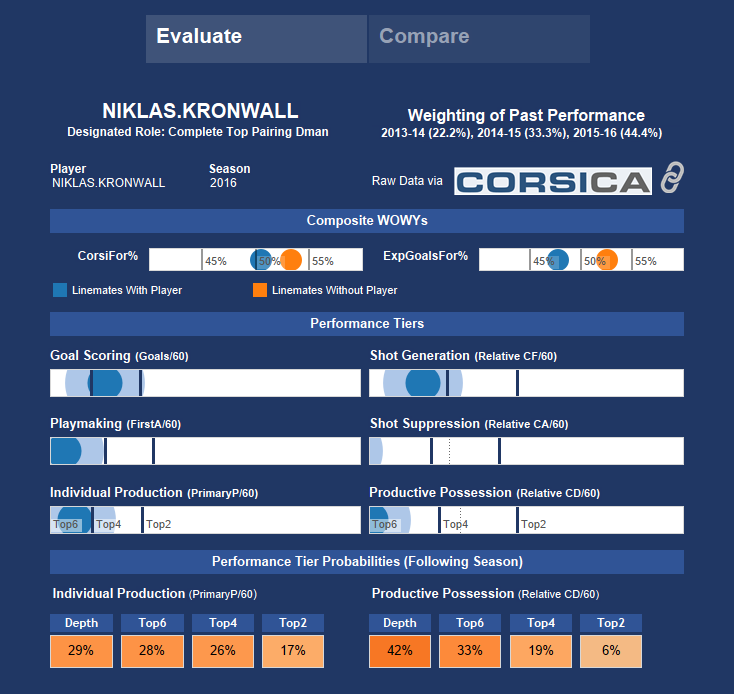 If you need more proof that Kronwall has entered into a decline, then look no further than this HERO chart. Not only is he not performing offensively like a top-2 or even top-4 defenseman, he’s actually dragging down his linemates. The Composite WOWYs show us that Kronwall’s linemates have worse Corsi For Percentages when they play on a line with Kronwall.

Last season, Kronwall missed eighteen games due to injury. He played an average of 22 minutes per game, scored three goals and 26 points, and held the worst plus/minus on the team with a minus-26. His CF% of 48.9% was the worst of his career. The playoffs were no better as he only recorded one point in the five games the team played.

Kronwall is definitely on the lower end in stats when stacked up against most of the players on this list. You can’t compare him to Justin Faulk or John Klingberg because their ceilings are still so high (given this, they are on very team-friendly deals). Outside of that, this is a pile of aging and average defensemen. The only difference is that Kronwall is so prone to injury now with his bad knees that he’ll play less games than the rest of them.

I mean, at least he’s not Chris Pronger. How is that man still getting paid?

Expect Kronwall to spend even more time on the IR. Already, he’s off to a bad start. He had to withdraw from Team Sweden at the World Cup of Hockey due to a knee injury and promised that he’d be back in time for the season, maybe even training camp. Well, he’s missed training camp and now there’s talk that he’ll miss the start of the season.

He’ll put up even less points than last season, dropping into the 19 to 20 point range, with half of those coming on the powerplay. He’ll still play 19-20 minutes a night when he’s healthy, though, despite his statistical output compared to his teammates.

The Red Wings have some good defenseman who are capable of playing more minutes. This could ease the pressure the team puts on Kronwall to be their best. It’s up to Jeff Blashill and his coaching staff now to seize this opportunity. Kronwall is not the defenseman that he once was and the Red Wings coaching staff should stop pretending that he is.

ALSO IN THIS SERIES